There is a special day every year for those of us who need and needed a home. it is to honor those who are still waiting for a forever home, those who found one, like me, and those who are gone and never found one.

So honor us. Celebrate and lavish your rescued babies with lots of lovin’ and treats and toys, and…and remember the ones still waiting and those we lost.

Shout it from the rooftops and make this a HUGE Holiday! Make the world take notice.

Go here to find out more things you can do for this day of honor and spread the word.

Personally, I think we should be celebrated every day. 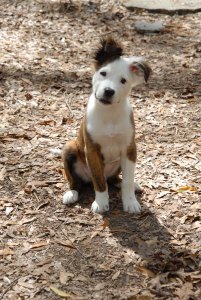 Mom and dad seemed pretty upset last Saturday. Mom especially. She was running around the yard all day getting furniture and other stuff out of the yard. She said there was a storm coming and it could all blow away. She called it Hurricane Irma. I thought with all the trouble it was causing it was probably named after the cat that started it.

I did not understand why she was so worried and running around bringing in furniture and plants. She never did it before when it rained.

I remember when I saw my first rain. Mom said we had been in a drought so I had not seen much rain. A drought is what people call it when there isn’t any rain for a long time. I just call it dry and sunny.

I was not so sure I wanted to go out to look at it but mom insisted. As long as she was there it was ok.

It was fascinating. All that water coming down from the sky. It felt nice and cool, but I was not interested in going out and getting wet. 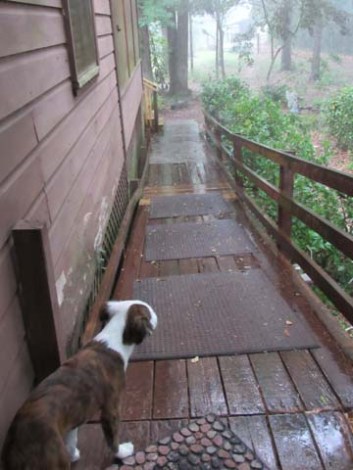 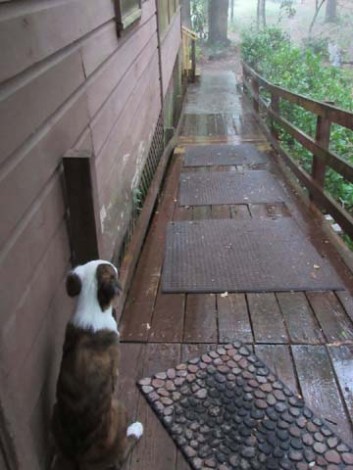 I really liked watching it though, as long as I stayed on the porch and watched.

I was five months old then. Just a baby. Rain doesn’t bother me much now. I like watching it from the screen porch.

This time she said it is different. This storm is really big and has lots of wind with it.

Sunday she spent the day cooking and moving things in the freezer and refrigerator. Someone came and helped put giant boards up on some of the windows. Mom said she felt like a sardine in the house, whatever that is. It did not sound good though.

I helped with the shutters. 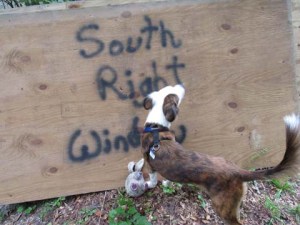 She spent the evening moving things in the house.

Everyone seemed real worried about this storm coming even King Arthur. Mom said he was praying. 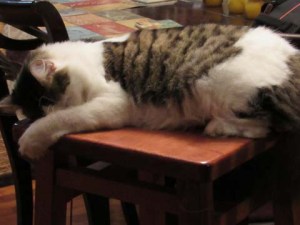 They were very long days and very tiring. I tried to help, following her around both days but I don’t know what she wanted me to do. She hardly noticed me.

Sunday night mom and dad left the tv on and watched a man talk about the weather.

Duh, it was raining.

Late in the night it got real windy and we heard a lot of noise outside. Mom said she was worried about the trees. They are so tall.

A few times we heard real loud cracking sounds. Mom would stand still and wait. Then we would hear a loud BOOM! Then mom would sigh in relief and move again.

Arthur and I knew something was up because they had both of us in the bedroom together with our harnesses on. King Arthur started to freak so mom put him in his carrier.

Around 5:30 in the morning the power went out. The tv was off, lights were off. Mom turned on a big stick with a light she could carry. A flashlight I think. She turned on the radio.

By the time there was some light outside mom said it had been a long time since I went out. She kept listening outside for the wind to see if it got better.

Finally she put down the puppy pads I used to to use. She set it by the front door where I used to have accidents and said “Go potty.”

I stared at her.

I looked at the mat, pawed at it then laid down on it.

I’m no idiot. I used to get in trouble when I peed inside the front door. She wasn’t fooling me. I passed the test. I am a good boy. I learned not to go in the house.

Finally, she said it sounded like it let up a little. She put my leash on me, opened the door and said “Let’s go.” I was all willing. I started to go out then saw and heard the rain and wind outside.

What is she crazy? I’m not going!

Then mom pulled the leash a little and showed me to go under the house out of the wind.

I ran down the steps, shot under the house peed, pooped and ran back up the stairs and into the house.

It was still raining and the wind still blowing after breakfast. Mom had brought in a big heavy cushion from my big round chair on the screen porch. She calls it a papasan chair. It was lying in the dining room.

Arthur was out of his carrier by now and a lot more calm. We both wanted that nice big cushion and it wasn’t so dark in the dining room.

Arthur was sleeping on it. I figured mom had enough trouble the last two days so I was a good boy and shared the cushion. It was big enough for both of us.

Mom was right. It was no ordinary storm.

When it was safe enough to go outside I saw all the branches that were way up in the trees were all on the ground for me to sniff. All the new smells. All the new sights. It was so exciting I ran around the yard like a rocket leaping over branches. It was so much fun! It was all over and it smelled and looked great!

Mom had a couple of big trees to clear off our driveway so we could get out. She did not let me go with her to help. It took a couple days to clear. Mom got a couple people to help her cut an opening on the driveway. We could have car rides again!

A few days later mom was cleaning up the yard picking up all the big and small branches. 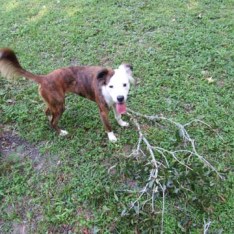 I also tried to help by separating out the good sticks for playing but mom kept getting mad. She doesn’t understand a good play stick when she sees one. I was just trying to help keep her from wasting a perfectly good stick. 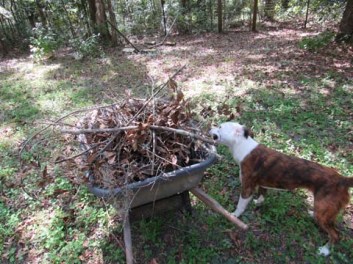 We burned the branches.

Those are so fun!

Mom says we are lucky. A tree did not fall on our house and the two giant trees that fell in our driveway and on our power lines were cleared enough for us to go out for car rides. Irma changed from a Hurricane to a Tropical Storm just before it hit us. She said that is better than a Hurricane. She has been in Hurricanes and they are even more noisy and scary than Tropical Storm Irma was.

Many people and animals were not as lucky as us. She said we should do what we can to help.

She said some animals cannot find their moms and dads and people are trying to help them. Others don’t have a place to stay with their families. I couldn’t stand not being with mom and dad…even Arthur. I want to help. Mom said to share information to everyone and their people.

Here are a few links to help the animals who are lost and hungry from Hurricane Irma and Harvey.

Here is help for their people.

We have friends and family in both states but mom said they are fine. They are safe and finally have power.

I hope everyone finds their family and gets food in their tummies…and everyone does what they can to help.

For me, I am glad it is over, I was able to help clean up and I am home and dry and warm with a full tummy with mom and dad…and Arthur.