Eventually Strider got to meet his “brother”, King Arthur. Everyone made such a big deal about him, you’d think he was royalty.

Arthur started coming down stairs more and more to check Strider out. It did not seem fair. The cat was allowed anywhere he wanted but poor Strider was not allowed upstairs.

Every time Arthur came down everyone froze. Strider tried to be nice and run and chase the cat but mom would get mad and stop him. Strider doesn’t get it.

They were allowed to sleep on the couch together but with restrictions…a barrier. For now anyway there is a truce.

Strider has found all kinds of beds he could use.

He has found ways to help out around the house, stay out of trouble temporarily and fit in…in the family and in all sorts of things like… 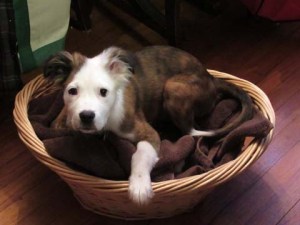 …and the laundry basket.

He is such a help, learning to do the laundry.

In the beginning he did not have the hang of it yet and was very awkward with the laundry.

He has gotten much better at it. He uses the basket now.

In Strider’s new home he discovered a whole new world. It had a big yard with new sights, sounds and smells. There was so much to do and discovery between naps.

He has lots of toys to play with between naps.

He has a nice big bed to nap on and dream about all his toys.

He found a big ball that needed attacking and herding. Size doesn’t matter to Strider. He’ll get that big ball under control!

Eventually he did. He popped it finally, picked it up and proudly trotted away with the carcass.

For little “Pirate” he had yet another new place to check out and get used to. He had a yard that , to him anyway, seemed way too big to explore in just a day.

His new mom was real nice. She stayed real close to him and picked him up a lot. “Pirate” liked that. She stayed especially close to him when they would go outside at night. That was fine with “Pirate”. There were some strange sounds at night. Sounds he had never heard before.

He would hear some sounds that would scare him a little and get ready to run inside. His mom would just laugh at him He did not see what was so funny. There was one sound that would send him running to the door and inside every time. There was some dog barking in the distance. “Pirate” could not figure out where the dog was or what she wanted. All he knew is he did not want to stick around long enough to find out.

“Pirate” discovered there are other animals in this new home. There is a “bird”, he was told. Strange looking thing. There is also a “cat” or they also called it “your brother”. The cat stayed out of sight for the first several days. He did not seem to like “Pirate” very much. “Pirate” could not understand why not. He tried to be friendly. Every time he saw “your brother” he’d run at him to greet him excitedly. Cats just don’t seem to understand happy.

His new mom and dad told him he needed a new name. Poor “Pirate” was being called all sorts of names not knowing which one was really his. For a long time he thought his new name was “no” because they called him that a lot. His mom kept joking that the cat, who he found was named Arthur, wanted to call him “Gone”, and then she would laugh. He doesn’t get the joke.

Finally mom sat down with him and asked him what he would like to be called. He sat in front of her staring. She asked again. He tilted his head. They stared for a while. Then “Pirate” walked over, grabbed a stick and chewed on it a while.

There were several names in the running. Bailey, Reily, Quasar, Nutrino, Aragorn (but everyone had trouble remembering it), Styx (because he likes eating them) and Happy (since he always seems to be). Snoopy was a thought since he looked a bit like him. For a while they even considered “knough” (pronounced “no”).

It took a while picking just the right name. His mom said it was important to pick just the right name that suits him. Finally they decided on Strider. His mom says because, like the character in Lord of the Rings, he is brave, a good skilled fighter but gentle as well, kindhearted, and good looking.

So Strider became his new name, unaware that he shared one other thing with the character. His journey would take him on many adventures. 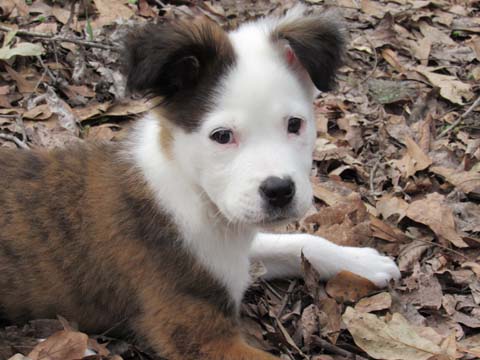 By the time he was two and a half months old, one cold Saturday afternoon he was shipped from a small town in Georgia from one animal rescue group to another animal rescue group in a town several miles south. He was called “Pirate”. He was in a pen outside with other rescue dogs. Unfortunately a cold front moved in that weekend.

The next day he met with a couple who was looking for a dog to fill their home and their lives. “Pirate” liked them, but then he liked everyone. The couple seemed to like him very much, but for some reason they left him there.

Two days later, that Tuesday morning, early, he was transported again. This time to a clinic where he was met, yet again, by strangers. He was in a strange place with strange people he did not know, strange sounds and very strange smells and he was only a 10 week old baby.

These strangers anesthetized him, neutered, vaccinated, tattooed and micro-chipped him. By the time he awoke that afternoon he found himself being transported yet again to yet another strange place. Only this time the couple he found himself with traveling in a van were vaguely familiar. He was too groggy and in pain to really figure it all out. All he knew is he wanted his doggy mom.

When the van finally stopped he was in yet another new place. It had a big yard. He was allowed to go inside the house…finally. Inside he found lots of toys and a big thick soft bed. It was his bed. He was just tall enough he could barely get his little legs up on it.

He was with the couple he met at the rescue a couple days before.

Even though “Pirate” liked everyone he met he was happy to meet this new couple and take on this new adventure, especially since he was allowed inside the house of his new home. He was inside, warm, fed and surrounded with lots of toys and attention.

Little did he know at the time, for “Pirate” this was just the beginning.