This Halloween we are joining our friends at Center for Biological Diversity and Forgotten Nations to help Endangered Species.

Endangered Species are entire populations of a species, like dogs, cats or squirrels are species but not Endangered, who are in danger of becoming extinct. That means dying until there are no more on the entire Earth! Wow!

Well, Arthur, Dakota, Nikita and I are getting in on the fun and the cause because none of us wants us or any other animals to disappear. You can too.

They have other things your people can do to help as well.

So a couple bats, a bee and a frog are getting involved.

Extinct means gone. Gone forever. No more. That would be like there were no more dogs or cats anywhere n the world! All gone. Well, cats maybe but dogs? That’s insane! That’s scary!

What kind of nut job tries to kill every animal on the planet? Why are they loose? I get sent to my room just for chasing Arthur. Why aren’t they in their rooms?

What if every animal was gone? Extinct. There would only be people left on the Earth. I love my mom and dad but come on. Let’s face it. Who wants to live with only people? They’re too easy to catch and really bad at wrestling.

Let’s keep people aware and on the move until something is finally done.

It isn’t the hungry little bat 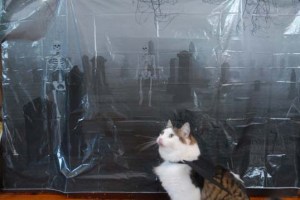 nor the bee or silly frog that you need to fear.

It is the mean monsters who keep wiping out species and the planet with their poisoning, burning and bulldozing our homes.

So get involved. Strider Bat and Arthur the Bat Cat say so.

No more animals? Now THAT would be a very scary Halloween.

Follow A Dog's Blog on WordPress.com
Join 90 other subscribers